There are five dimensions: EARTH, WATER, AIR, SPIRIT, and FIRE. You will have to progress through these dimensions in this order. To teleport to one of these dimensions you need to find a portal structure in the overworld: 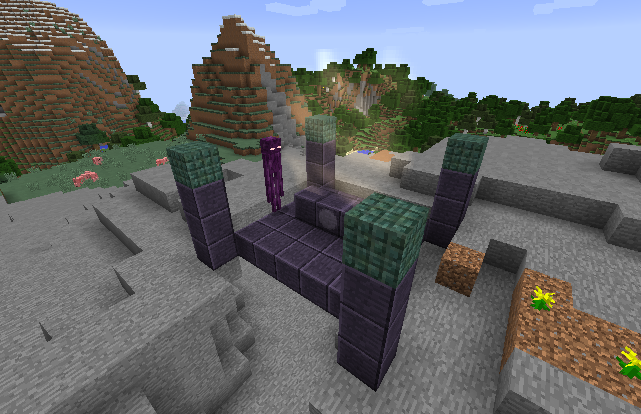 Be careful! These portals are protected by strong enderman like creatures called Guards! Once you kill a certain number of them they will stop spawning. They do have a very important loot though as they hold the key to entering the first EARTH dimension.

When a position in the overworld has a portal then the five dimensions will also have a portal structure at exactly that spot. That way a single portal can be used to traverse between the five dimensions and the overworld. In order to set the destination for a portal you need to 'dial' it using one of the runes. The first rune (the Rune of Earth) can be obtained from killing the Guards. Just right-click the run on the dialer (middle block of the portal) and the image should change. You can step through to the EARTH dimension: 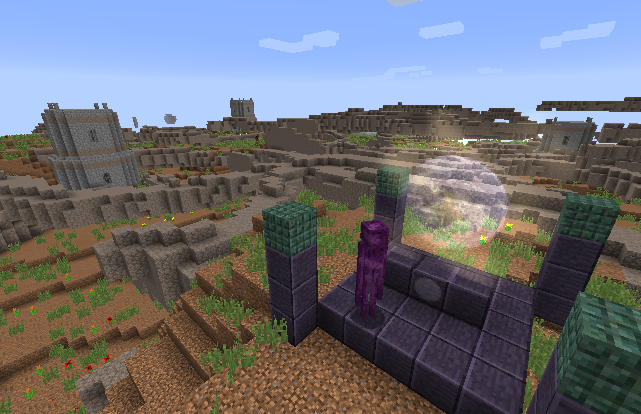 Once there you will notice that the portal is already dialed back to the overworld. There are several important things to do in this dimension. Most importantly you must find the three parts of the water rune which are needed to make the Water Rune for the next dimension. One of those parts can be obtained from killing 'dirt zombies' that are all over this dimension. One other part can be found deep under the ground in small dungeons. These are somewhat hard to find. The final part must be obtained from the boss. This boss spawns exactly at midnight. You will get a message when he has spawned. Note that the boss also has a focus item that you should collect until later. That will become important once you have the Elemental Wand.

One other thing that you can find in this dimension is Elemental Dust Ore. This ore is not useful yet but when you have cleared all five dimensions it will become very important as it is required to charge the Elemental Wand: 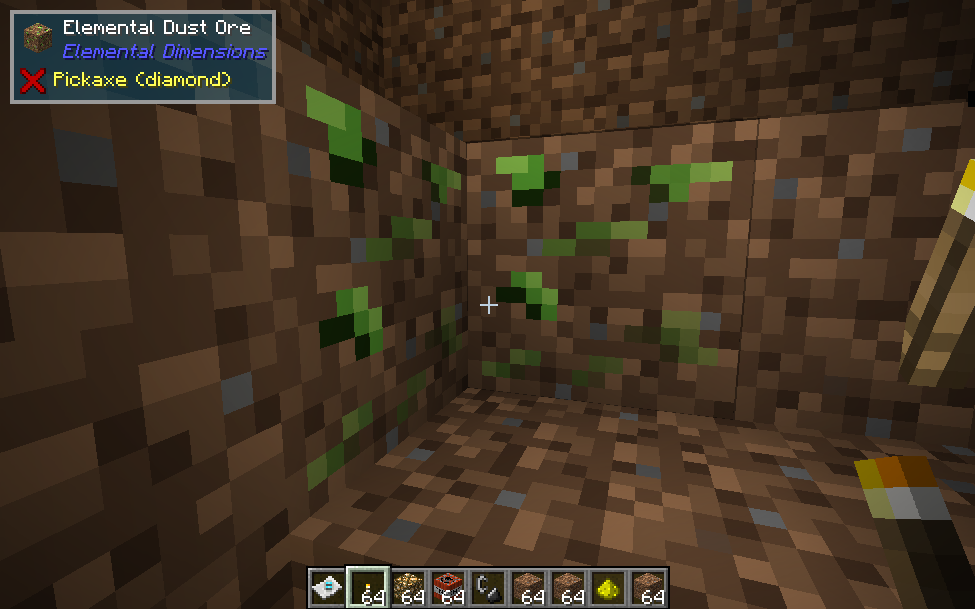 Once you have obtained all three parts of the water rune you can craft it and using the new Water Rune you can dial the portal to the WATER dimension: 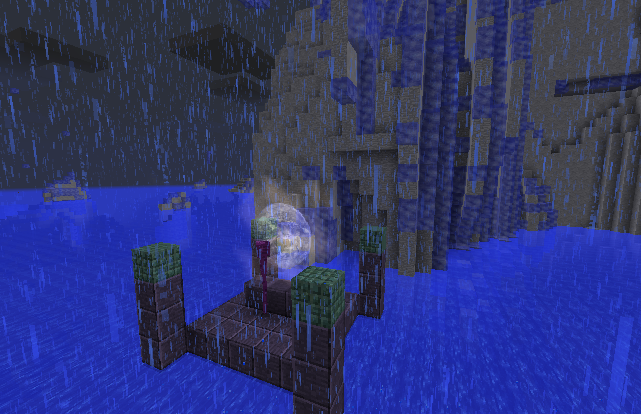 The WATER dimension is (as you guessed) full of water, and it is constantly raining there. Finding the three parts for the Air Rune (for the next AIR dimension) is a similar problem as in the EARTH dimension. One part can be obtained from killing the water creeps that spawn everywhere. Another part can be found in underwater dungeons and the last part must again be obtained from the boss in this level. Spawning the boss here is a bit different. To do that you need to craft a 'Water Seed' item and toss it in the water. Then make sure to stand back a bit: 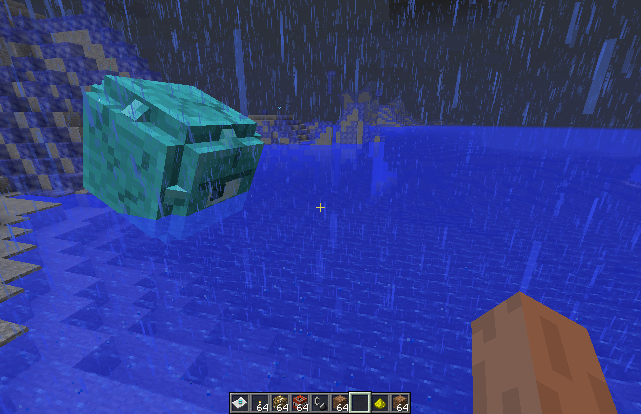 Note that the water boss also gives you one of the focus items.

Using the Air Rune you can go to the AIR dimension: 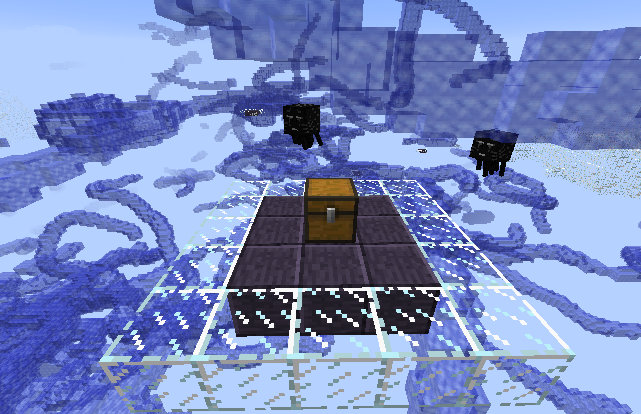 The hardest thing in this dimension is navigation as there is a strong wind that pushes you in one direction all the time. You can hide from that wind a bit if you build a small enclosure. Again to proceed to the SPIRIT dimension you need to find the three Spirit Rune parts. One from the flying black ghosts (see the screenshot above), one from a floating dungeon (again see screenshot) and the last one from the Air Boss. To make that boss you throw an Air Boss Seed in the air and wait a bit: 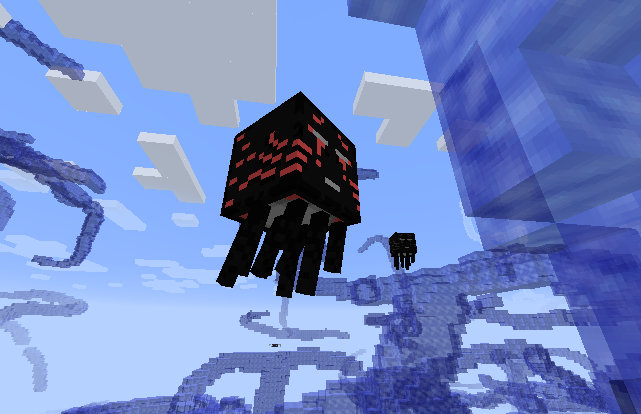 Note that the Air Boss and the dark ghosts are not affected by the wind in this dimension (life is not fair). 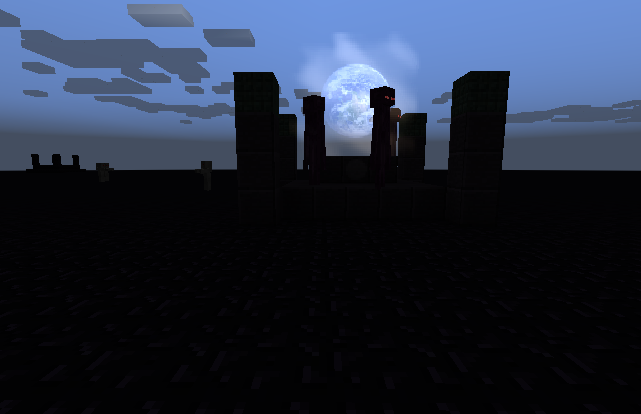 As the boss for this dimension is not implemented, yet you can get two of the three parts from killing the spirits that spawn in this world. The other part can be found in surface dungeons.

The final dimension is the FIRE dimension: 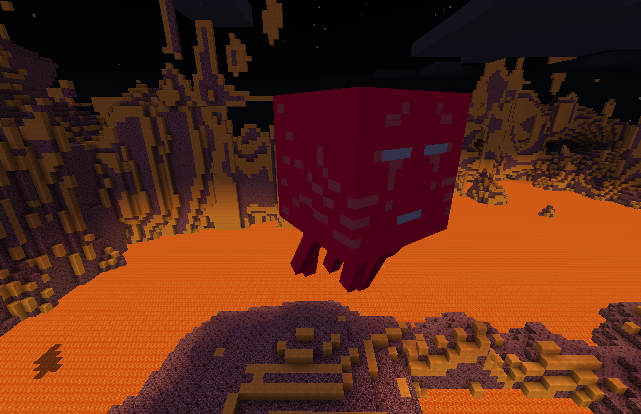 To spawn the boss there you need to throw a Boss Seed in the air and wait. Make sure to stand back a good distance as there will be two very strong explosions before the boss spawns.

The fire boss is the one that will give you the Elemental Wand: 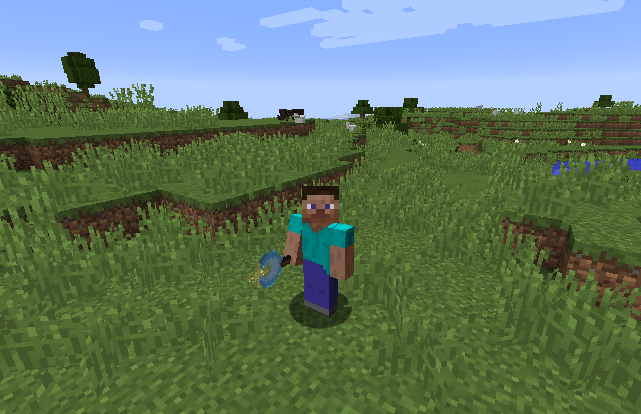 To use this wand you need to find Elemental Dust. This can be found as an ore in the EARTH, AIR, and WATER dimensions. The EARTH dimension is probably the easiest to get it from though. But in the AIR dimension the ore is easiest to see as it generates in glass there.

To fully charge a wand you need four stacks of dust but the wand will work with less too. So how do you charge a wand? Basically with a setup like this: 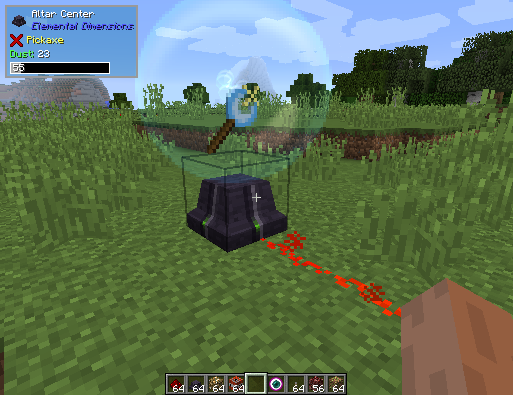 So you place down an altar, right-click the wand to insert it. Right-click a stack of elemental dust and then give it a redstone signal.

To use the wand you need to hold one of the three currently implemented focus items in your offhand: