XNet is an item, fluid, energy, and information transportation mod that is all about efficiency. The cable system is designed in such way that you should be able to make huge cable systems without any overhead. Cables (for example) are not tile entities and have very simply models. This makes transporting items accross a cable of 12000 blocks long just as efficient as doing it on a 5 block long cable.

At the core of this mod is a network. A network is basically a single section of connected cables connected (via connectors) to various blocks (chests, machines, ...) and one controller. The controller is the block that does the actual work for that network.

Every network can have 8 channels maximum. Every channel has a type (energy, item, fluid, logic, ...) that you can configure in the controller. Depending on the type of a channel and the machines that are connected to that channel various things can happen.

You use connectors to connect machines to your network. Through that connector various channels (even with different types) can do their thing. Normal connectors only allow access through the side from which you are placing the connector. i.e. for a vanilla furnace that would mean that with a normal connector you can only get the melted result by placing a connector at the bottom of the furnace. Using advanced connectors you can overcome that limitation and access the down side of a furnace from any other side. Advanced connectors have other advantages. They allow higher speeds for item and fluid transfer (10 ticks minimum per operation as opposed to 20) and can store more RF (which means they can also transfer more RF).

One warning: an advanced energy connector can still not extract energy from another side. The reason for this is that it is actually the generator/producer itself that pushes energy and it will not do that through that other side. Insertion of energy to another side does work however.

Cables (and connectors) can have four different colors. These are used to be able to distinguish multiple distinct networks adjacent to each others (to prevent the cables from connecting). A controller will adapt its color to the first colored cable it can find around it and then remember that (unless that color is totally removed).

The logic channel is special. First one has to know that every network has seven colors (don't confuse these with cable colors) which is either enabled or disabled. By default all colors are disabled. Every connector (in the controller GUI) can be configured to be active only when a number (up to four) colors are active. Using a logic channel and sensors you can (based on various conditions) enable colors. For example, you can have one sensor detecting how much RF is left in a machine. And if that number goes below 1000 enable 'red'. Then another sensor can detect if there is enough coal in a chest and if true enable 'green'. Then you can have an item channel transporting coal to a coal generator but only when both 'red' and 'green' are enabled. So that means: only enable the coal generator is power is low and there is enough coal. Sensors themselves can also be enabled/disabled based on colors.

Inside the GUI of the controller you can give a channel a name. This name isn't used anywhere except with the router that is directly attached to this network though a connector. Only channels that have a name will be visible locally in the routing GUI.

One thing to note is that item and fluid transfer is always immediate. There are never items or fluids 'inside' the network. If there is no room for items or fluids to go too in a network then they will not leave their destination.

Power transfer works differently. Since RF and Forge Energy are 'push' systems (i.e. a powercell or generator pushes energy to adjacent machines) the connector needs to have an internal RF storage. The advanced connector can store more than the normal connector which means it can also transfer more. When you have an energy channel distributing energy to various machines then the power first has to go to the connector (pushed by the generator) and then it can be transferred to all machines that need it.

The controller needs power to do this. There are basically three power consumption areas: 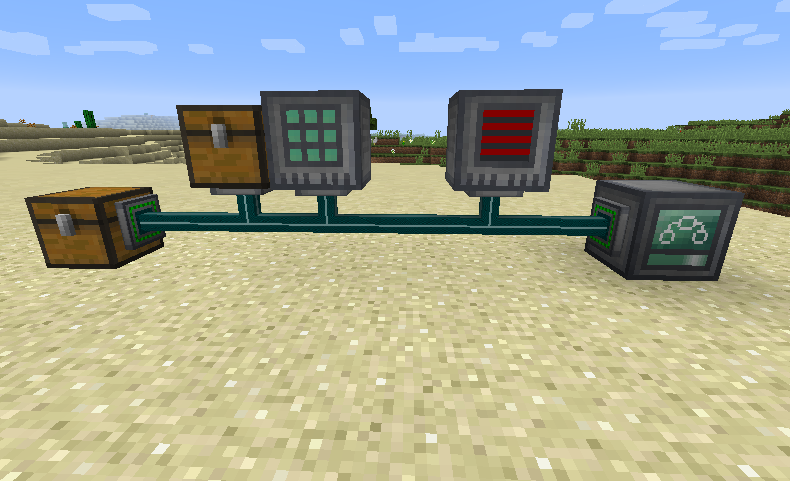 The goal of this setup is to make sure the top chest always contains at least one furnace. That's the only thing this does. As soon as you pull out that furnace it will start producing another one. To do this a crafter is used which is fed from that same chest (it contains cobble). The crafter also needs energy (and so does the controller). The left chest contains coal which is for the coal generator. The system makes sure that no coal is wasted. It will only insert coal if this is needed. The energy buffers of the crafter and controller are also not filled completely. 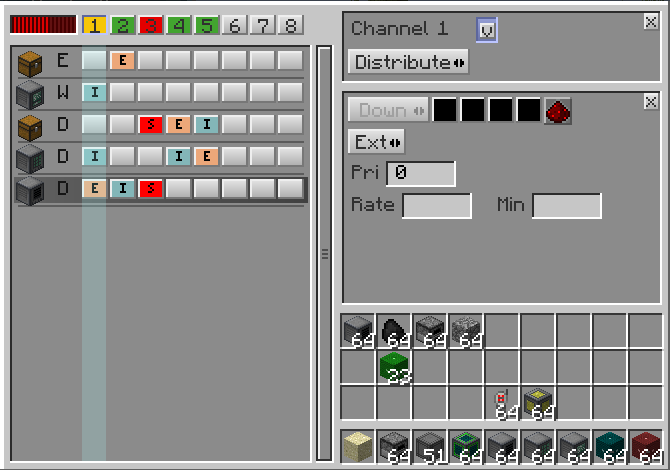 In this connector we simply extract whatever energy there is from the coal generator. This is then distributed to the controller and the crafter. In these connectors we also set a maximum (which isn't clearly visible because the input element for maximum is too small in this version) so that the power isn't needlessly wasted: 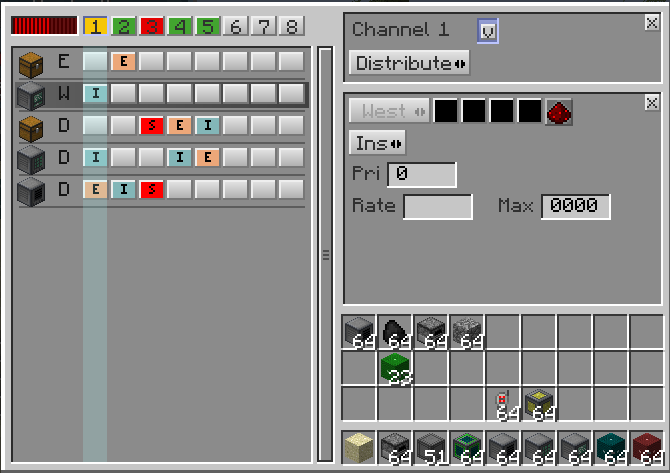 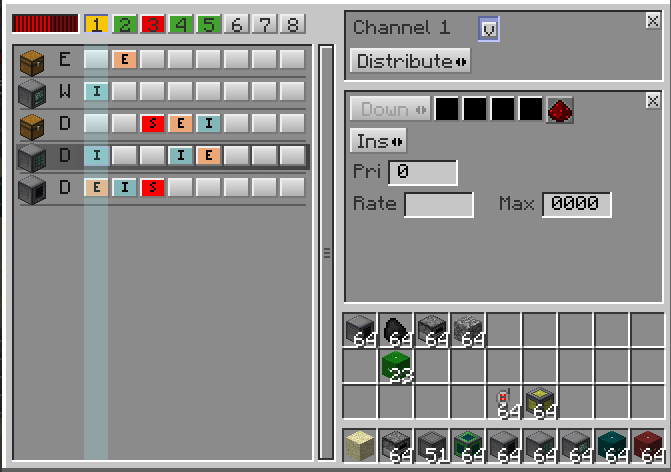 To produce energy the coal generator needs coal. Let's see how this is handled. First we extract the coal from the chest. We only do this if both 'red' and 'green' are enabled. We will see when these are enabled later in this tutorial, but basically they are enabled only when we don't have enough power and when there is enough coal: 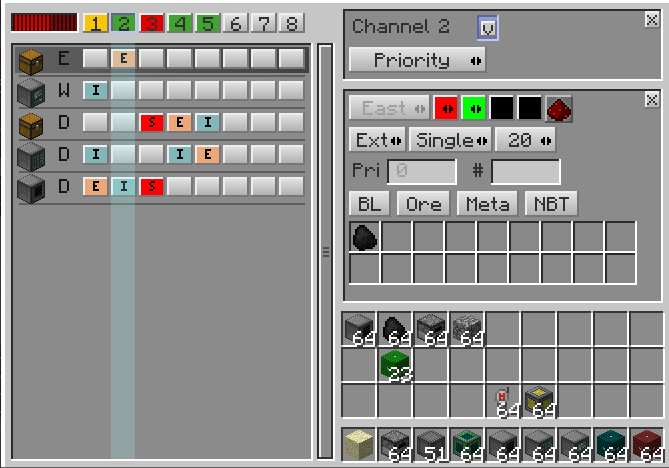 And here we insert the coal: 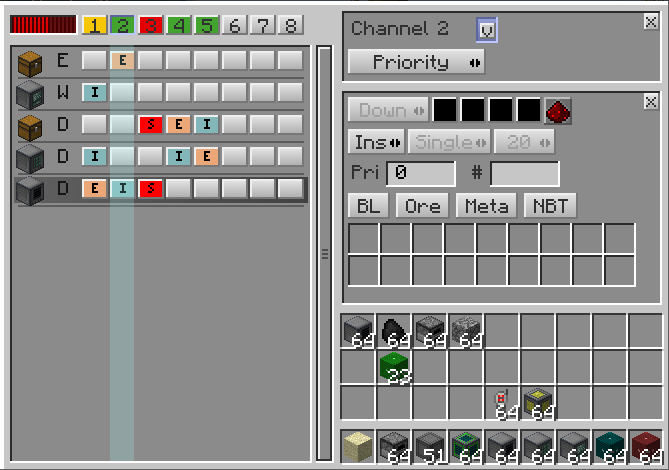 We have a logic channel which measures when it is time to start producing energy, and it also senses if we have a furnace in the chest. First there is the sensor to check if we need energy and if there is enough coal: 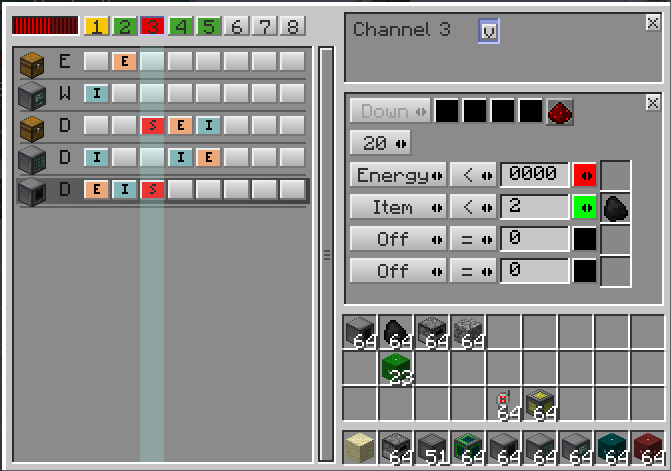 The other sensor works on the blue channel and is enabled if we have less than 2 furnaces in the chest: 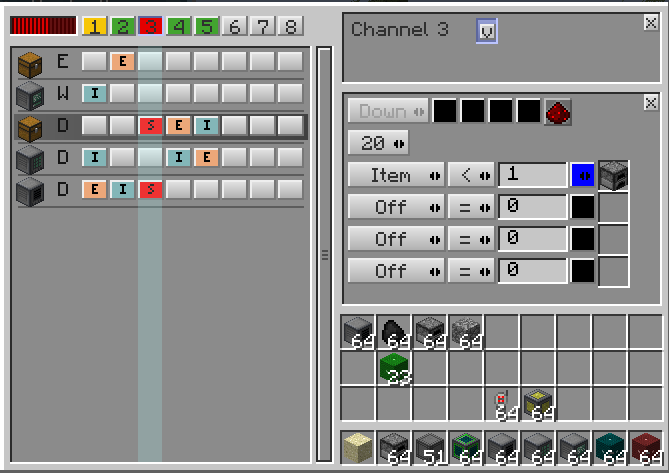 Channel 4 will move cobblestone from the chest to the crafter as long as blue is enabled. Blue will be disabled as soon as the crafter makes a furnace: 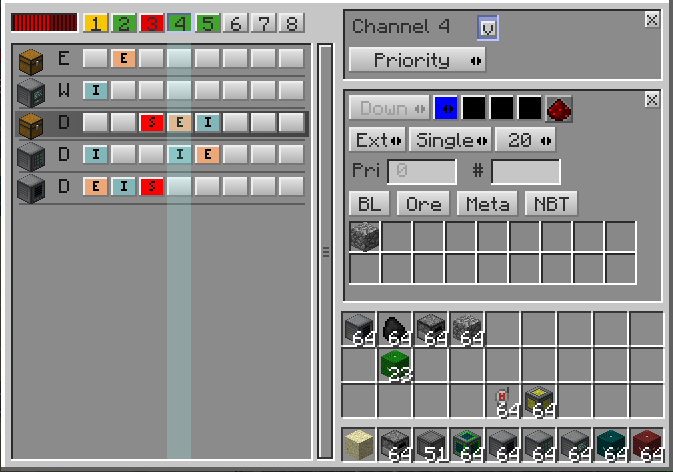 Channel 5 is simple and just moves the created furnace from the crafter back into the chest.

This is not a finished tutorial yet but here is possible setup: 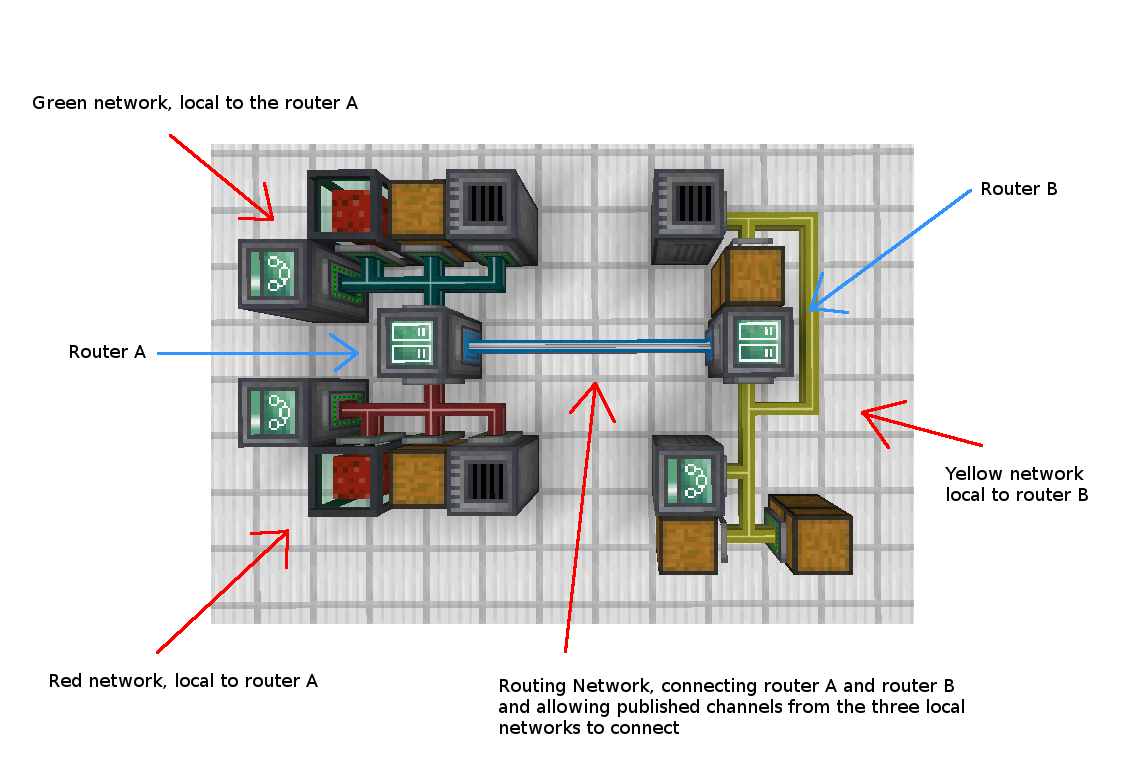 First there are three local networks each limited to eight channels (for items, energy, fluid, logic). There is the green, the red, and the yellow channel. The green and the red channels are connected to router A. So they are local to that router. In fact one router is enough to connect different channels. You can publish channels from the red and green networks and connect them with each other. However, there is also a yellow network connected to router B. That's a remote network from the perspective of router A. To make channels available to other controllers you must publish them (give them a published name) in the router that they are connected too. Additionally, the channel must also have a name in the controller.

In the future it will be possible to connect channels wirelessly.